Sign up to emails to get updates, recipes and a whole lot of other good stuff.

Dame Sarah Joanne Storey is a British road and track racing cyclist and former swimmer. She is a multiple gold medal winner at the Paralympic Games in both sports, and six times British (able-bodied) national track champion (2 × Pursuit, 1 × Points, 3 × Team Pursuit). Her total of fourteen gold medals makes her the most successful female British Paralympian of all time.

Storey was born Sarah Bailey in Manchester without a functioning left hand after her arm became entangled in the umbilical cord in the womb and the hand did not develop as normal.

In 2007, she married tandem pilot and coach Barney Storey. Storey gave birth to her daughter, Louisa Marie, on 30 June 2013. In April 2017, it was announced that Storey was expecting her second child, who was named Charlie John.

She and her husband live in Disley, Cheshire.

Swimming at the Paralympic Games

Sarah began her Paralympic career as a swimmer, winning two golds, three silvers and a bronze in Barcelona in 1992. She continued swimming in the next three Paralympic Games before switching to cycling in 2005, reputedly because of a persisting ear infection. 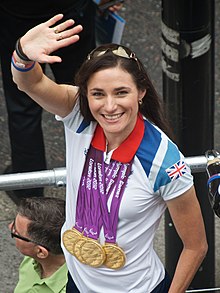 At the 2008 Paralympic Games, her fifth, Sarah won the individual pursuit – in a time that would have been in the top eight at the Olympic final – and the road time trial.

Sarah also competes against non-disabled athletes and won the 3 km national track pursuit championship in 2008, eight days after taking the Paralympic title, and defended her title in 2009. In 2014, she added a third national track title with a win in the points race.

In 2011, Sarah competed for one of the three places in the GB squad for the women's team pursuit at the 2012 Olympic Games. Although she was in the winning team for the World Cup event in Cali, Colombia in December 2011,she was informed afterwards that she was being dropped from the team pursuit squad.

Sarah Storey attempted to break the world hour record at the Lee Valley VeloPark in London on 28 February 2015. She set a distance of 45.502 km, which was 563m short of Leontien Zijlaard-van Moorsel's 2003 overall world record – however Sarah's distance did set a new world record in the C5 Paralympic cycling class as well as a new British record.

Sarah Storey was a nominee for the 2008 Laureus World Sportswoman of the Year with a Disability and the 2012 BBC Sports Personality of the Year.

In 2018 Sarah and Team Storey teamed up with Black Circle Coffee , a specialist coffee brand to help support their cycling team with races and general coffee requirements as well as support them on race day and at events including the teams official launch in 2019.

In March of 2020 Sarah Storey created her own blend of coffee designed for the cycling community called Velo Espresso and launched it to the world on April 11th 2020. Available exclusively online Velo Espresso is a triple certified Brazilian blend dark roast bean. Certificated by the Rain Forest Alliance and classified as organic this blend is a premium offering that is a world exclusive from the cycling legend ahead of the 2021 Olympics.